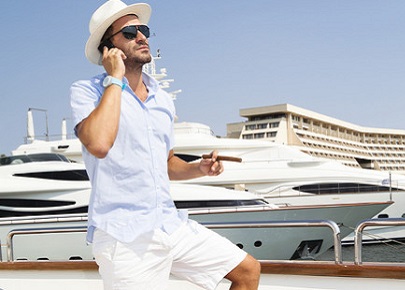 A new social networking site was launched just a few days ago, but this one has a very particular target. Netropolitan was announced as “the new Facebook” for the rich, and is described by its owners as the “online country club for people with more money than time”. The exclusivity of the site is dictated by only one requirement: having enough money to pay for membership. This new social network has a $9000 USD membership fee, and an annual fee of $3000 USD, which makes it impossible to afford for most people.  If you thought social media was ridiculous, wait to you see this!

The launching of the network has certainly generated some buzz, not only because of the excessive pricing –especially considering that most social networks are free- but also because the main argument or idea that led to the creation of the site is that rich people felt discriminated when using other sites. According to its founder, his own experience in social networks gave him the idea to create the site. He felt like he couldn´t relate much to the people he met on other sites, and that whenever he posted something about his lifestyle people would be judgmental. So he decided to create an online environment where people with a lot of money can talk about their fancy living without the backlash.  If you want to post pictures of your new yacht or Ferrari, this is the platform for you.

Whether or not this is a crazy idea or genius, there is one important thing that needs to be considered: the safety of the users and their data. For Russian private investigators, who have a vast experience on cybercrime cases, the sole existence of this site represents an important risk.  Criminals will certainly be trying to target users on this site, due to the fact the users have money.

Is Netropolitan immune from fraud?

The first thought is that a service so expensive should be. Regular online dating scammers are not likely paying such a high fee to experiment with their scamming methods here. But think twice, this is no guarantee that users will be safe. The first thing to consider for a user of any social network is that the mere fact of being online makes it vulnerable to hackers. So the answer would be no, there is no website immune from cybercrime.  If hackers can get into the Obamacare website, JPMorgan and Home Depot, rest assured they can easily access this new social media site for the rich.

Not many of the features or details about this new website have been disclosed, but it is known that to use the site members need to be over 21 and use their real names, which makes things even riskier for the users (as far as criminal targeting is concerned). One of the things that should make people alert is that the founder himself has mentioned that on the first day the website crashed due to abundant traffic. This, in terms of cybersecurity, means that the website has not been built strong enough and that it is vulnerable. Add into the picture Russian hackers and voilà! It is handing criminals rich people´s information on a platter, and we can all rest assure that they will find it very useful.

How can you be safe?

As mentioned before, anything that has been shared using the Internet is prone to theft and scam. The idea of online privacy has changed a lot through the last few years, but the most important thing is to consider is safety. For those who wish to socialize in a new environment and can afford it, then maybe this site is your option. But keep in mind that being safe depends a lot on the use you make of the internet and less on the tools themselves.   No matter what site you meet someone on, if you’re considering a relationship, be safe and get a dating background check to verify.

Anything you don´t want people to know about you should never be shared online -this applies for everyone.  Some of the things you don´t want to share might be details of your personal life like what your home looks like, where your kids go to school, nude pictures of yourself or hints of how much money there is in your bank account.  What gets on the Internet is hard to get off!

Sharing too much information online is a great risk for the rich and the poor, because you´ll never know how a criminal might use that information.  Not to mention the government and companies targeting you and your information.  Russian private detectives know the best way to go is to share less and lead a more private life.  This can go a long way to protecting you, your money and your family.  Be safe, share less, and when you meet someone new, verify the facts with a professional.